Can I use cryptocurrency towards my house purchase?

Can I use cryptocurrency towards my house purchase?

Sign up to myFT Daily Digest to be the first to know about Cryptocurrencies news.

I have a modest sum invested in cryptocurrencies which I would now like to use towards a house purchase. However, my lender tells me they cannot accept it and neither can the conveyancing solicitor I was hoping to use. What is the best way to use these funds for this type of purchase?

Daniel Browne, a senior associate at Kingsley Napley, says there is currently very limited appetite for sellers to accept cryptocurrencies throughout the UK. If you want to use your crypto investments towards a house purchase, this will generally involve the conversion into government-issued currency, such as sterling.

The antipathy towards cryptocurrency stems partly from its much-publicised association with criminality and money laundering. The Proceeds of Crime Act 2002 makes it a criminal offence to deal in any way with assets that a person knows or suspects are the proceeds of crime. This applies to the owner of the assets and their professional advisers who are involved in the transaction.

However, while some lenders are reluctant to lend money where some or all of the deposit is made from the proceeds of crypto, some are now prepared to do so (including Nationwide, Halifax and Barclays). Shop around for a crypto-friendly lender as early in the house buying process as possible.

The challenge is to find a conveyancer who is prepared to accept the crypto proceeds into their client account. There are not many.

Money laundering regulations require conveyancers to take steps to identify who their client is and verify that the funds they receive from a client are not proceeds of crime. This means that the provenance of the crypto assets must be understood, including the way they have been traded and with whom.

This typically involves the instruction of an expert who is able to carry out a full audit on the crypto proceeds being used. That audit can then form the basis on which the conveyancer can make a judgment as to whether it is safe to proceed with the proposed transaction.

Can I claim bereavement benefit even though we weren’t married?

My partner recently passed away. We have two children under 18, but we were not married. Am I allowed to receive widow’s benefit or any other type of bereavement benefit?

Jo Edwards, partner and head of family law at Forsters, says the main UK financial support for families following the death of a parent or partner is the Bereavement Support Payment (BSP). In 2017 this replaced a range of benefits, including the widowed parent’s allowance (WPA), bereavement allowance/widow’s pension and bereavement payment.

At present, BSP is restricted to individuals who were married or in a civil partnership with the deceased at the date of their death. As such, I am sorry to say that you are not currently eligible for BSP.

Rightly, this will soon change following a series of government defeats in the courts on the difference in treatment between unmarried couples and their married counterparts when relationships end through death. It has been increasingly difficult to justify that discrimination, especially as unmarried couples are the fastest growing family type in the UK.

Four years ago, Siobhan McLaughlin, who found herself ineligible for bereavement benefits due to not having been married to the father of her children when he died, took this inequality to the highest court.

In August 2018, the Supreme Court found that the narrow eligibility rules for the old WPA breached human rights. Its reasoning was that the allowance exists because of the responsibilities of the deceased and the survivor towards their children, those responsibilities being the same whether or not they were married and that children should not suffer this disadvantage because their parents chose not to marry. 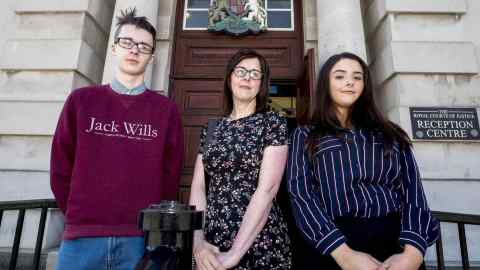 That was followed by another court judgment in 2020, which found that the same eligibility rules applicable to the new benefit — BSP — were also incompatible, discriminating between children on the basis of the legal status of their parents’ relationship.

After some delay, the government announced last month its intention to extend eligibility for both WPA and BSP to surviving unmarried partners with financially dependent children. The government intends that the broadened eligibility rules will be backdated to August 30 2018, with some claimants eligible to receive retrospective payments.

As such, you may soon be eligible for BSP, provided you were living together at the time of your partner’s death and the other requirements are met. The changes will apply across the UK.

BSP is paid at one of two rates, with an initial payment of £3,500 followed by 18 monthly payments of £350 for those eligible for child benefit or who were pregnant when their partner died, or £2,500 then £100 per month in other cases (for those who do not receive child benefit). There are strict deadlines for applying, as from the date of death, which can have an impact on the amount received. In your case, you will have 12 months from the date of the new regime coming into force to claim to receive the full amount.

The rules governing WPA are different, though they are not applicable in your case. It is worth enquiring whether you may be eligible for any death in service benefits your partner may have accrued (which tend not to be limited to surviving spouses and civil partners, though check the specific policy in question) and whether you are eligible to receive any benefits under their pension.

The opinions in this column are intended for general information purposes only and should not be used as a substitute for professional advice. The Financial Times Ltd and the authors are not responsible for any direct or indirect result arising from any reliance placed on replies, including any loss, and exclude liability to the full extent.

Do you have a financial dilemma that you’d like FT Money’s team of professional experts to look into? Email your problem in confidence to [email protected].

My wife and I have been married for 40 years. We are not separated, nor wish to be, but for family reasons she moved back to her native Norway in 1995, where she now lives as my non-domiciled spouse. We’ve agreed that on my passing, all my assets will be left to her and she will distribute them equally, one-third each, between her and our two children.

I thought she would inherit my estate tax-free but I’m told this is not the case because she has not lived with me in the UK for 26 years. Does this mean she will only be allowed the £325,000 tax exempt allowance, and likewise my children, before they must pay 40 per cent inheritance tax (IHT) on the residue?

This seems unfair as we consider ourselves just as married as any other married couple. What advice can you give us to avoid or limit paying excessive IHT?