It is not a matter of surprise to see Dogecoin grace the trending list on Twitter. Whether it goes up or down, crypto enthusiasts always end up knocking at the Twitter doors waiting to unleash their emotions whether it be fury or excitement. Although Dogecoin has been going on a really low tide for a while, often swaying the users’ belief in future hopes, today it has seen a momentary surge. Although, if you ask me, I would say not to get too excited. Because it is Doge we are talking about. And it goes up and down like a rollercoaster. To be fair, a rollercoaster goes up more often than the Dogecoin prices. Despite its volubility that often gets on peoples’ nerves, it cannot be denied that Dogecoin has often been the source of hilarious memes. And in my opinion, it deserves applause for that. Even if it doesn’t fill the pockets, it at least manages to sharpen their wit and humor sense. And as someone somewhere said, something is better than nothing. 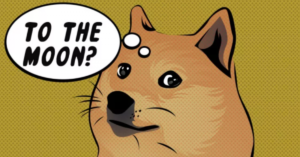 Dogecoin and Twitter have developed a very close friendship over time. Although that sounds a bit too dramatic, it is not without some truth. Whatever happens with Dogecoin, the first tremors will be reflected in Twitter town at quicksilver speed. After all, everybody needs a catharsis point, particularly when the axis point of frustration is something as uncertain and fluctuating as Dogecoin. Let us take a look at the various reactions and responses on Twitter as Dogecoin once again entered the trending list on Twitter. (However, it must be said that sometimes when Doge gets trending, it is hard to discern the actual reason.)

Invest in #Dogecoin my brotha

Aggression is always a part of this.

Don’t panic. Doge is going to the moon!
🚀 #Dogecoin pic.twitter.com/1TKLMbhJhU

Patience is a noble virtue after all or so they say.

Always Listen to Mama…
💯%🚀🚀🚀🚀
It was my Mom that got me into #dogecoin because she wanted to get some.
I Thank her everyday. pic.twitter.com/sB5jL5ceB2