The LINK/USD closed at $24.19, after placing a high of $24.99, and a low of $22.89. LINK/USD continued its bullish streak for the third consecutive session on Wednesday, reaching its highest level since June 15, on the back of the improved market sentiment.

On Wednesday, the decentralized oracle network, Chainlink, announced a partnership with the decentralized real-world asset lending protocol, NAOS Finance. The association was called upon to develop a Chainlink oracle solution for financial assets in the primary and secondary markets.

According to the Head of Partnerships at Chainlink Labs, Daniel Kochis, the network was excited to support NAOS in providing their users with tamper-proof data feed and making real-world financial data, that was previously unavailable in the DeFi ecosystem, more accessible. According to the founder of NAOS Finance, Kevin Tseng, the company has a long list of corporate borrowers finding ways to break away from their geographic constraints for funding, and were eager to work with Chainlink and NAOS to gain worldwide exposure. The partnership was explained with the example of a Bloomberg terminal for global SMEs that are isolated from the global economy and only serviced by their regional banking partners.

In simple words, the Chainlink deployment will give NAOS lenders access to the same financial data that was previously only available to a handful of privileged financial institutions. This news added further to the prices of LINK/USD and pushed the cryptocurrency towards its highest level since June 15.

Meanwhile, the improved sentiment of the cryptocurrency market, driven by the rising prices of leading cryptocurrencies, like Bitcoin and Ethereum, also added strength to altcoins, like Chainlink. The LINK/USD followed the market trend, almost reaching $23. 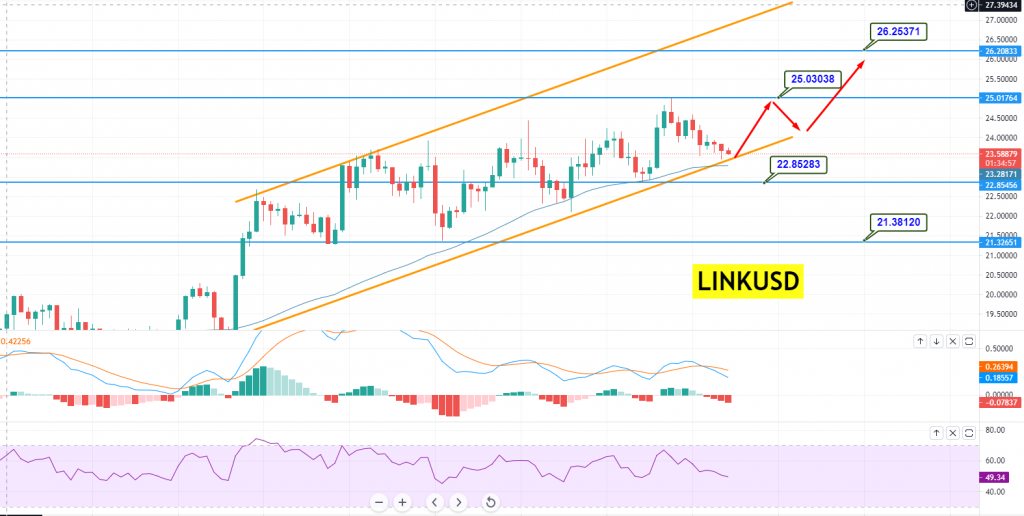 On the technical side, the LINK/USD price is testing the upward trendline support level of 23.50. A bullish crossover of the 50 EMA support could trigger a buying trend until around 25. This crypto coin is forming a higher-high and higher-low pattern, suggesting a strong bullish bias among investors. The MACD and the RSI are in the selling zone, but have failed to break below the 22.85 level, which could drive a bullish trend in the LINK/USD.On the lower side, a breakout at the 22.85 level could lead the coin towards the 21.38 support level. Let’s keep an eye on this level, to take a buy trade above it and a selling trade below it. Good luck!